The successful Regional French television channel, France 3 Normandie, is moving its headquarters to a new building in Rouen. Once the space is delivered in June 2019, its occupants will benefit from a state-of-the-art building management system (BMS) that integrates a range of Sontay Smart sensors.

After two years of studies, construction and installation, France 3 will have new offices, a studio and state-of-the-art control rooms. The team will be able to conduct interviews from the Grande Armada of Rouen located on the banks of the Seine. Built at the foot of the Flaubert bridge, near the quays, the new building of 3,000m² has a space of 2,100m² purposefully built for hundreds of journalists, technicians and administrative staff. 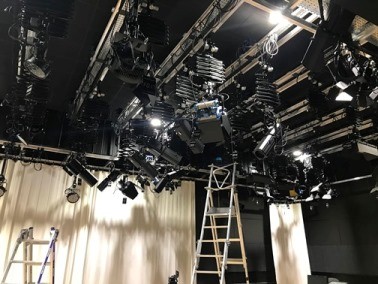 The GTB Niagara system was installed and commissioned by the French integrator FLH Energie.  In keeping with the technology France 3 is utilising in its work, the BMS is equally as sophisticated and forward thinking. More than 80 ST-TOUCH-P touch thermostats using Modbus have been deployed on this project.

"It's a smart building that has been developed with the occupants in mind and meets a very innovative specification," comments Franck Lecouflet, Director of FLH Energie. "It is in this spirit that we have selected ST-TOUCH from Sontay. They allow employees of France 3 to easily control each space using a touch interface in the room. The offices are mostly open-plan and it is very important to be able to adjust the temperature per zone in an open space environment.”

The ST-TOUCH thermostat has a modern appearance and intuitive temperature control to maximize energy efficiency. Whether surface mounted or recessed, its smartphone appearance and full touch interface make it very easy to use. FLH Energie chose the ST-TOUCH-P for this project so it can programme the heating according to a schedule or time slots specified by each user. The thermostat can also work, if necessary, with a remote temperature sensor.

FLH Energy also installed more than 80 VZ-2N-15 zone valves equipped with VZ-SM230 actuators. Sontay zone valves are developed for on/off control of fluid flow for any heating or cooling application, such as air handling and fan coils units. They have a synchronous motor and spring return mechanism for greater reliability in case of power failure and are equipped with a standard auxiliary contact. This allows the heating to be safely distributed in the building and improves comfort.

Franck Lecouflet continues, "We are very proud of the final result. The touch screens are beautiful and fit perfectly within the office architecture. They have been very simple to programme and commission. We are confident that they will be very easy to use for all occupants of the building.”

At the inaugural on-site ceremony for the start of the building work in September 2017, Marie Claire Dallet-Humm, Director of Real Estate at France Televisions commented: "We could have opted for contemporary architecture at the heart of the metropolis, on the other side of the River Seine, but we have remained faithful to the history of the place, that of the docks and sheds. "

Delphine Ernotte, CEO of France Televisions, added that this new building and the 10 Million euros spent on its construction "Show the attachment of France 3 to Normandy and the desire to settle there for a long time".